23 Cubs, 4 leaders and 3 parents from our pack went to Cuboree. We were in Sub Camp Mars, with the funny martian as our emblem.

We left Brookvale on Sunday aboard the coach at 7.30am, arriving at camp about 10am. We unpacked, had time for a game of cricket, then lunch. After lunch we had a range of interesting team games with Tabloid Sports. Sunday night was the opening ceremony.

On Monday morning we had Oz Warp, which transformed us back to the early days of the Australian colony. In the afternoon we went to the Roman Warp. Here we captured lions, wrestled, shot arrows, had a chariot race and smashed up Caesar's kitchen. That night there was a movie in the sub-camp.

On Tuesday we had Space Warp in the morning. This was water activities, including throwing a water filled balloon, water pistol skirmish, horizontal bungee, and of course the water slide. In the afternoon it was Marine Warp, also known as Challenge Valley. This is a commando course with ropes, climbing, water, and of course mud! Entertainment this evening was the Cub Idol talent quest.

On Wednesday we had Cave Warp where we explored the man-made caves at Cataract. We also tried our skills in the Minute To Win It challenges. In the afternoon we flexed our Harry Potter skills at Mystery Warp where we played Quiditch and passed our Engineer's Achievement badge. That evening was the closing ceremony where everyone danced to the Rocky Horror theme "Time Warp". Let's do the time warp agaaain, it's just a jump to the left ..... Yeah we were sick of it by the end :-)

Thursday morning we were up very early to pack, have breakfast and be on our coach at 7.15. We said goodbye to all our new friends and headed off. Everyone arrived back at the hall happy but tired and ready to tell many stories to the parents and siblings before a good bath and a well needed sleep.

Special thanks to the parent helpers Leanne, Neil and Brian who gave up their time, and the leaders Rama, Baloo, Rikki and Skipper, and the countless cast who helped with preparation, packing and putting away afterwards.

Most of this group will have gone up to Scouts and will be ready for the Australian Jamboree in January 2013 in Queensland. 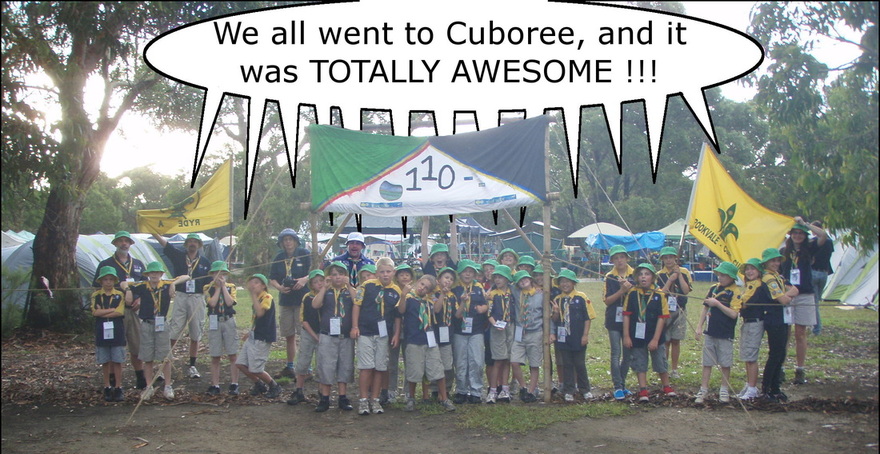 A small selection of photos below. Click on a thumbnail to show that photo, or move the mouse over the large image and click Play. All our cubs also got a DVD with over 2000 photos on it.