Brookvale Curl Curl Scout Group
This page shows photos from events where the whole group took part. Each section has photos under the link in the menu bar. 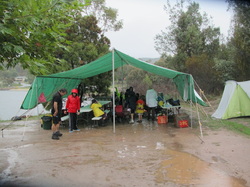 Camping in the rain, oh joy! A hardy bunch braved cold wet weather, mud, streams running through the tent and general misery to have an alleged great time at Lake Lyell near Lithgow. 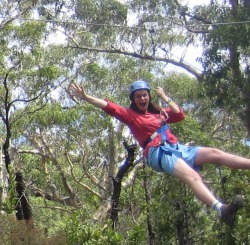 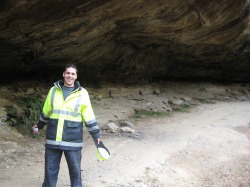 Rock likes to be safe!
Over 50 Joeys, Cubs, Scouts and Leaders and families attended this year's Family Camp at Dunns Swamp. The rain didn't put anyone off, as we had loads of screened covered area. Uno and Poker were popular as was bushwalking, climbing the pagodas for breathtaking views,  and canoeing and fishing as the weather cleared up. The swimming part of the program was an unfortunate side effect of canoeing with Teddy! There was a special trip into town for the those who can't miss the Grand Final. Dinner included a hearty beef casserole, and chicken stir fry and yummy pancakes for breakfast on the last day.
The kids loved the main campfire and their own special one, under a rock outcrop just out of sight.
Thanks heaps to Adrina for the superhuman effort, and also to the Putaansuus for towing the canoes and the fantastic shelter you shared with us all. 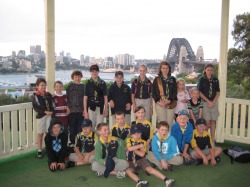 On 19/09/09 on a moonless night the whole group went on a night visit to Sydney Observatory. We went to town by bus and then walked up to Observatory Hill. We had a picnic in the bandstand, which had wonderful views of the Harbour Bridge before the scouts taught the younger kids a new game. We met some Pathfinders that were also visiting the observatory.  We saw the moons of Jupiter, the dual suns of Alpha Centauri and learnt about constellations in the planetarium and saw the Southern Cross and the Scorpion and Orion constellations in the sky. We learnt how to find due South by the stars. 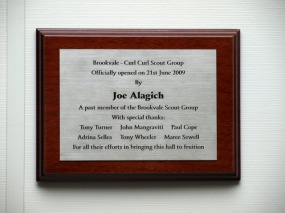