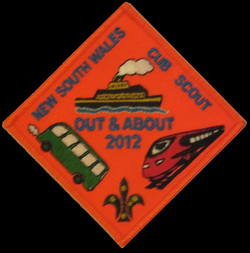 Out and About is a state wide event where Cub Scouts get out and are seen in the community. Northern Beaches District chose to visit Cockatoo Island. The island is located in Sydney Harbour about half way between the Harbour and Gladesville Bridges.

Along with Cub Packs from Manly Fairlight, 1/2 Harbord, Cromer Dee Why, Collaroy Plateau and Elanora, we caught a ferry from Manly Wharf to Circular Quay, then another ferry to Cockatoo Island. We spent several hours exploring the wide variety of historical buildings.

Areas of the island go back as far as the convict days, where up to 500 convicts were housed in cramped conditions. For more than 100 years the island became a heavy engineering workshop and shipyard. Retaining all its character and heritage from decades of human endeavour by convicts and shipbuilders alike, Cockatoo Island has opened its doors to all as a museum island. See the Cockatoo Island website for more details and maps.